The Power of Asking Why

Lecturer learned more about idiopathic subglottic stenosis by continuing to dig and ask why. 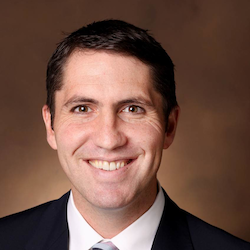 As a resident, Alexander H. Gelbard, MD, was mystified. He helped treat patients with subglottic stenosis, but no one knew why so many of those patients were otherwise healthy Caucasian women, or how best to treat them. Fast forward to 2021, and answers are beginning to emerge.

Large multicenter studies led by Dr. Gelbard have demonstrated that idiopathic subglottic stenosis (iSGS) is a unique disease entity. It occurs almost exclusively in otherwise healthy adult Caucasian women and is confined to the proximal airway just below the vocal folds. An expanding range of endoscopic and open interventions are available, along with adjuvant medical therapies that bring symptom relief to patients.

“Together with engaged patients and superb colleagues, we have defined the natural history of idiopathic subglottic stenosis, established new tools to follow physiology and patient reported outcomes across the world, and built a good sense of how well our current treatments work,” said Dr. Gelbard, who is also managing director of the North American Airway Collaborative (NoAAC) and a tenured associate professor in the Department of Otolaryngology-Head and Neck Surgery at Vanderbilt University in Nashville, Tennessee.

Dr. Gelbard will discuss the ongoing cutting-edge research within NoAAC to define the cause of iSGS and pioneer new treatments during the H. Bryan Neel III, MD, PhD, Distinguished Research Lecture “Idiopathic Subglottic Stenosis Arises at the Interface of Host and Pathogen,” 2:30 – 3:30 pm (PT) on Monday, October 4.

“Despite our initial hypothesis that unique pathogenic bacteria drive iSGS, our recent findings suggest that the bacterial community in iSGS patients appears pretty similar to normal bacteria in healthy hosts,” Dr. Gelbard said. “The other interesting finding is that the bacteria on the surface of the airway are similar to the bacteria in the depths of the scars. Those observations have pushed us to interrogate the epithelium, the barrier lining of the airway, and how bacteria shape the inflammatory response in this group of patients.

“We believe iSGS patients possess defects in their airway epithelium predisposing them to displacement of normal surface bacteria into the immunoprivileged lamina propria, a region where they should not be,” he said.

This triggers sustained host inflammation and subsequent tissue remodeling that ultimately obstructs the airway and produces symptomatic dyspnea in patients, according to Dr. Gelbard.

Although the mechanisms responsible for sustained inflammation remain an open question, he said he sees parallels to another fibrosing airway disease, idiopathic pulmonary fibrosis (IPF). Although IPF is confined to the lungs, an interplay between genetic predisposition and environmental insults damages a vulnerable epithelium and leads to inflammation and subsequent lung fibrosis.

“One of the most rewarding aspects of our work has been the collaborative spirt of patients and otolaryngologists across the world to chase down answers in this disease,” he said. “As surgeons, we all possess a sense of curiosity, an intuition for biologic variables, and an innate desire to evaluate evidence objectively. As practicing otolaryngologists, we employ essential features of the scientific method in our treatments for every patient, each day. I believe our work in idiopathic subglottic stenosis reinforces that good science is accessible to everyday clinicians.

“The answers are out there, but we’ll only find them if we keep asking why,” Dr. Gelbard said. “Asking why is our conduit to every kind of explanation, and explanation is what drives progress.”